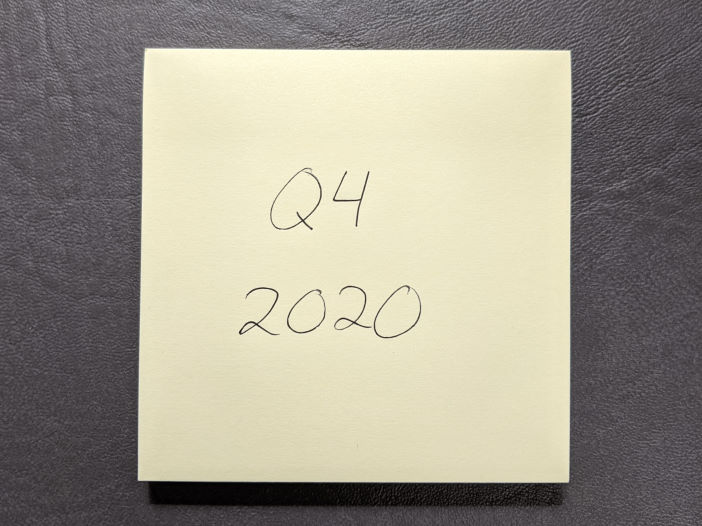 I wrote it over on our company blog and combined two topics that deserved separate attention — one being benchmarks for our primary industry, the other being a year-in-review where I take an honest look back and assess how we did.

They’ll be separate now, because the people looking for industry benchmarks probably don’t care about my ramblings on the growth of our business. I’m also publishing it here instead of our company blog so that the opinions expressed here can be purely my own.

Hopefully you find this helpful in some way.

The State of Evergrow Marketing

Jake and I experienced our second consecutive year of growth (and since we’ve only been doing this together for two years, that means we’re two for two). As I write this, our net income is up 53% compared to last year.

The only reason that number isn’t higher is because we refused to accept new clients at a rate that would compromise the quality of our work. Specifically, I have refrained from pursuing inquiries outside of the landscaping and lawn care niche because we aren’t prepared to service the majority of them. By “we aren’t prepared”, I mean we don’t have enough time. We could if we left our day jobs, but given the choice between eating ramen noodles and working until 2:00 a.m., I’ll keep working until 2:00 a.m.

What has contributed to our continued growth? Nothing new, really. We still haven’t spent money on our own internal marketing. We continue to benefit from the reputation (and links) Jake has built over the years. We rank on Google. Existing clients refer new ones. I know people like to hear about sexy growth hacks, but steady, sustainable growth isn’t sexy; it’s monotonous. We’re good at what we do and continually work to make it better.

What We Did Well

We started doing repetitive tasks with enough frequency to document the procedures. Our project management upgraded from a messy Google Sheet to Basecamp with links to documentation in Dropbox Paper (we had originally planned to use SweetProcess — I wrote about it here).

It’s nice. Our quality control is better; all accounts meet our minimum viability standards and it shows in performance reports. It’s an uncomfortable thing to say, but we don’t just forget things anymore — if we don’t do something, it’s because we had to put it on the back burner. Nobody likes to say that, but I think it’s a noteworthy accomplishment.

One of the main value propositions of running a niche marketing agency is having access to data the other guys don’t. I can (and do) build winning Google Ads campaigns for new clients based on the success we’ve seen with other clients.

The best part about the process is how it snowballs — new accounts allow us to gather more data, which enables us to run tests faster and get better results, and that brings in more clients (here’s a technical post on this philosophy). That’s where we’re at now. The learning curve on our new Google Ads accounts is minimal. They crush it from launch.

3. We hung out more (and got better at fighting).

Remote work is mainstream now that COVID has forced big businesses to adapt. It’s fun to be a hipster and hate on mainstream stuff, so that’s what I’ll do: Remote work sucks.

Really? Well, generally no. But for getting to know people and building meaningful relationships, yeah, remote work sucks. It’s hard to actually get to know people — their passions, pet peeves, etc — and when you do it’s often a consequence of something going wrong or someone getting offended (myself included). My experience is that, the more time you spend in-person, the more those problems go away.

I don’t have a lot that we did badly. All things considered, I think we crushed it this year. But there is one thing that I caught myself doing often, and I’m consciously working to get better at it.

I did a pretty bad job at matching the weight of a message to the medium in which it was delivered. Considering I went to college for communication, you’d think I would do a better job.

It’s easy to do and seems like a shortcut at the time, but messages get misinterpreted or blown out of proportion. So if my message has the potential to get misconstrued, I’ll save it for when I can properly convey what I intend.

The State of Myself

I’m duplicating the previous headings and applying them to myself this time. It helps explain some of the previous stuff in more detail because running a business is personal.

What I Did Well

There isn’t a lot to say about the first half of this year. Like most people, I had plans that fell apart. But instead of wallowing in the general state of the world, I decided to begin formally learning Japanese.

Reorganizing my life to support working a day job, a growing side hustle, and going back to college was hard, but has made me more productive in all facets of life — it doesn’t seem to make sense at first, but it’s true. My output has never been this high and I’m consistently eating better, working out, and getting work done. Probably because, when you can’t afford the time to do things later, you do them right away, or at least deliver on the time you had set to do them.

What I Did Poorly (and How I’m Working on it)

I know and have had people tell me that the hunter who chases two rabbits catches neither. I get that. There’s truth in it. I also think if you told that to a first-generation American immigrant who’s working towards a better future, they wouldn’t care because they’re too busy working. A day job, a night grind, and learning a foreign language? Sounds like a lot of successful immigrants I’ve met.

I knew this would suck going into it. Some things would slip through the cracks and I would get Bs in three subjects instead of As in two. I also know this is temporary. Eventually, Evergrow will grow (ha) big enough to be a full-time thing and life will get easier. I just have to tough it out until that point. The only real solution is keeping my head down until I can afford to make the jump.

Back in college, I remember questioning whether I would ever be a functioning member of society or if having clinical depression would always hold me back. Back then, I wasn’t thinking about business — all I wanted was to get and hold a decent job.

Now, I need to prove to myself that depression isn’t an anchor — I might have to work harder and in different ways, but you can be successful and have depression; the two aren’t mutually exclusive.